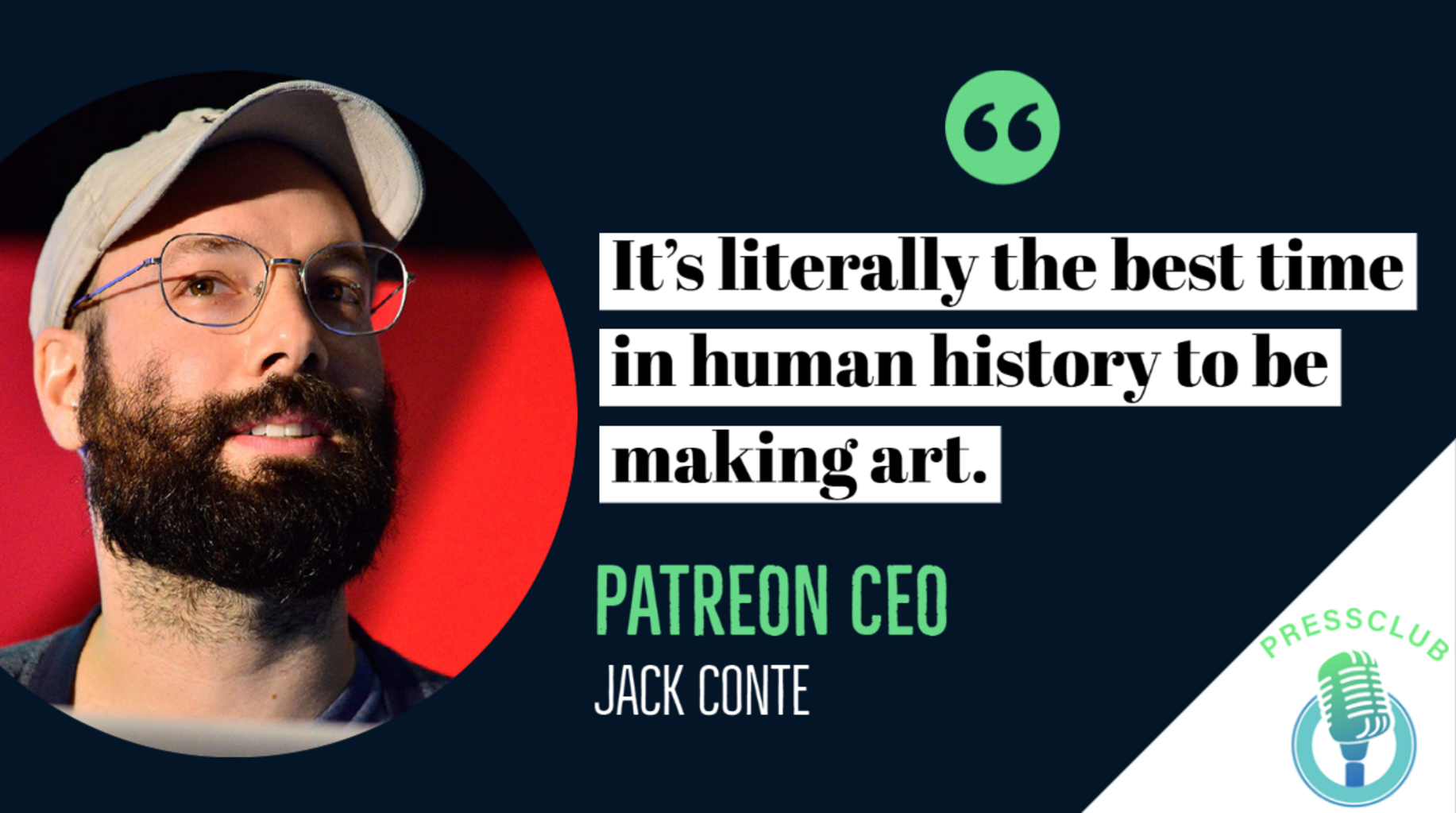 Listen to the full PressClub interview with Patreon CEO Jack Conte above or on your favorite podcast app. And join me live as I interview the Substack founders about the rise of the solopreneur on Clubhouse at 6pm PT Thurs 4/15

I have this theory that “rock stars” are just creators who use the most powerful medium of the moment to deliver their underlying message. That could be The Beatles spreading “All You Need Is Love” through the transistor radio and Ed Sullivan Show, or Mark Zuckerberg’s effort to “make the world more open and connected” via Facebook. I’m not exactly sure what her message is — perhaps unapologetic self-confidence — but you could see Kim Kardashian as having mastered celebrity media like reality television and tabloid press.

What is clear is that the holistic social media ecosystem is today’s dominant medium. But what makes it different than those that came before it is its fragmentation. To become rockstars in the modern age, artists must be more than virtuosos of a single discipline.

But there was one big problem. The social media platforms solved distribution but forgot monetization. 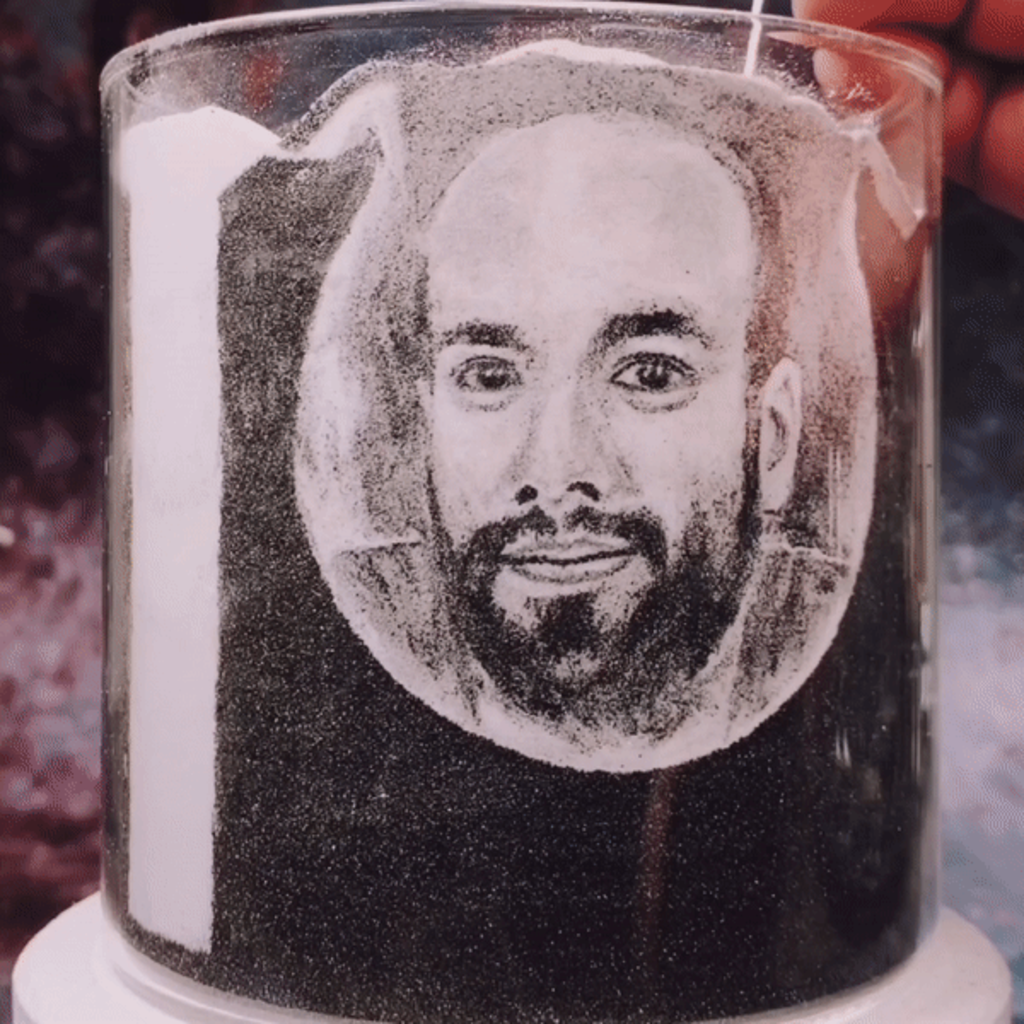 This sand portrait of Jack Conte, a collab between PressClub & FallingInSand, is on sale now. Winner gets the 1 of 1 physical sand-filled glass portrait and NFT GIF of its creation, with 20% of proceeds donated to StopAAPIhate.

I brought Patreon CEO Jack Conte on my Clubhouse show PressClub to discuss why creators got left behind, but now suddenly every startup and platform is competing for their attention.

Besides ad revenue shares and sponsored content deals that were only meaningful for the most popular YouTubers or available to the most persuasive influencers, most creators in the mid-2010s weren’t earning much money.

Art got roped in with information that was ‘supposed to be free’. It was common for new distribution channels like Instagram, Vine, Snapchat, and TikTok to launch and even scale with no native monetization features. Most creators weren’t selling physical media like CDs or getting cast into broadcast media like TV shows and films, where social was just the loss-leader. The art they were convinced to publish and promote for free WAS the product.

This caused what I call The Creator Crisis: In the mid-to-late 2010s, it became standard for social media platforms to omit creator monetization options because competition wasn’t requiring it. If the major platforms didn’t cave, creators wouldn’t have anywhere to go, so they’d have little choice but to provide the fruits of their labor for free.

But finally, cracks in this united front to suppress creator earning began to appear. Gumroad launched in 2011 and Patreon launched in 2013 specifically to help creators monetize their fan bases. Artists stood up and said “‘Wait a minute, this whole business that I had and this dependence on unit sales as a source of revenue for my arts business is gone. What am I supposed to do?’ And I think this is where the creator economy starts to happen” Conte says. 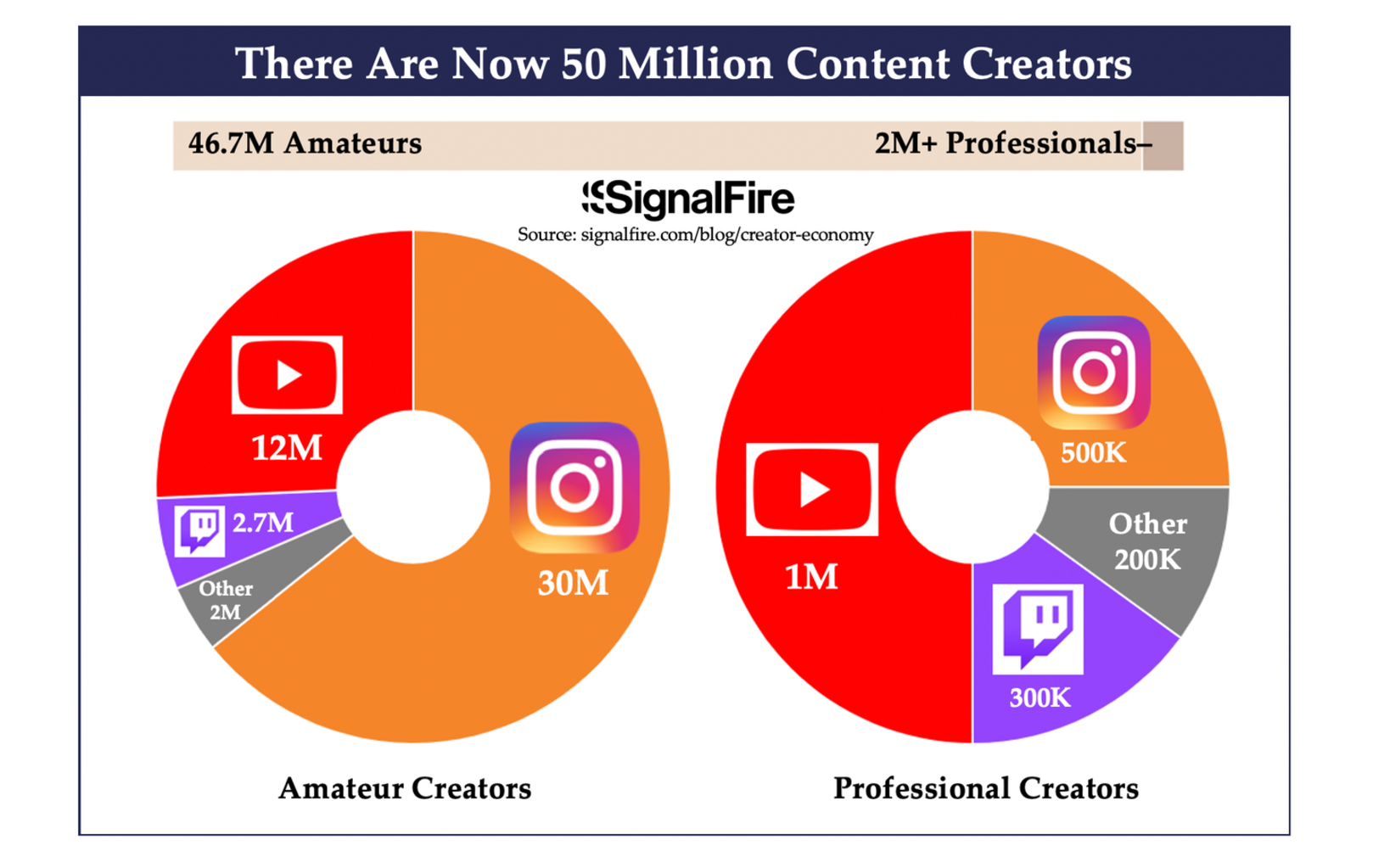 Vine stars demanded monetization features, its owner Twitter refused, and many fled for YouTube. Platforms got scared. Twitch introduced tipping with Bits. By 2018, YouTube started testing Patreon-style Channel Memberships and Facebook offered Ad Breaks that paid video creators for mid-roll commercials. “It took 15 years of frustration and some early web platforms like Patreon and others to kind of force the hand of the distribution companies to start taking payments seriously as a core part of the infrastructure. So that's why I think the creator economy is happening.”

The platforms were too late, though. A new wave of startups had started to form to take advantage of these stingy distribution channels’ unwillingness to treat creator monetization as more than an experiment or bonus feature. As we detailed in SignalFire’s Creator Economy Market Map, phase 1 of the creator economy was creators joining big social platforms, and phase 2 was growing huge fan bases on these platforms but being limited to ad revenue shares and influencer deals. But phase 3 was already underway, and the fan migration to more lucrative properties had begun.

The defining trend of the past few years has been creators sending their top fans off-platform and using tools from these new startups to monetize them. Paid subscriptions on Patreon. Tipping on Buy Me A Coffee and Cash App. Content sales on OnlyFans. Merch on Fourthwall. Shout-outs on Cameo. Meet-and-greets on Looped. Events on Luma. Exclusive communities on Discord. Courses on Podia. Clothing rentals on Wardrobe. NFTs on Foundation and Bitski. CRMs like Pico. Analytics like GRIN. Ecommerce dashboards like Tradeswell. Financing options like Karat.

This proliferation of infrastructure is what I call The Creator Renaissance: A Cambrian explosion of creator tools built by startups to solve The Creator Crisis caused social platforms’ failure to offer adequate monetization options. 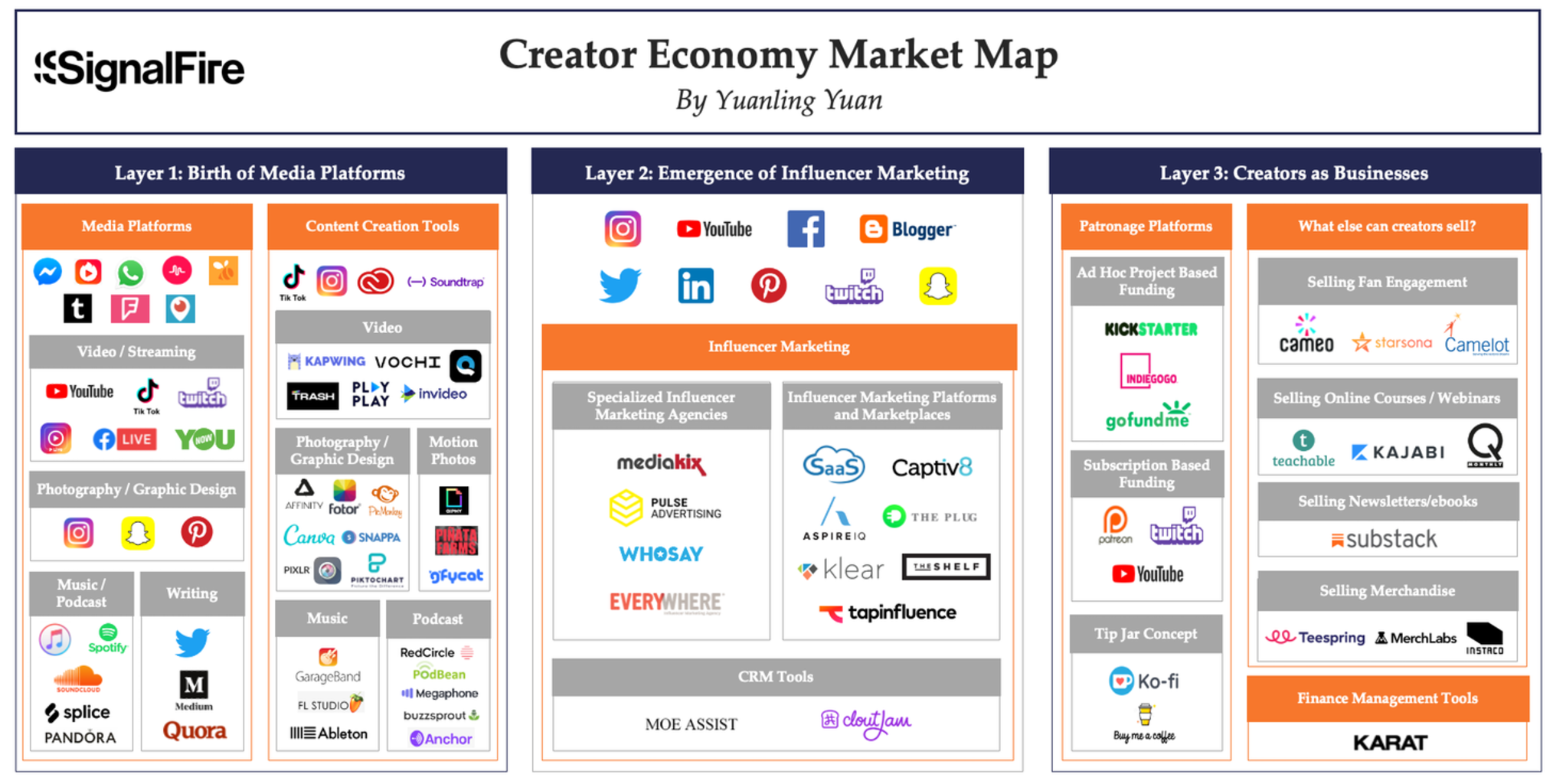 “Unfortunately, I think it's happening because people see the market opportunity . . . they're thinking about, ‘What is the feature set required to acquire and retain video creators?’” Conte explains. “Because YouTube launched channel memberships kind of as a response to Patreon, now, Facebook has to launch channel memberships, and now Twitter's got to launch Super Follows. Now everybody's got to get in, because now it's becoming a table-stakes feature in distribution tools.”

That’s good news for artists. Platforms finally competing for creators’ business will get them better tools, more lucrative deals, and channel optionality that lets them walk away from apps that don’t treat them right.

So back to creators as the new rockstars of the social medium. In such a fragmented environment of new formats, channels, revenue streams, and infrastructure tools, being a creator has suddenly become quite complicated. Artists must choose to either:

It’s option C that’s minting superstar creators like Mr. Beast. Hiring a team and paying for tools can be a daunting upfront cost if a creator isn’t already earning a decent revenue. But the creators growing the fastest and building up real careers will be the ones willing to invest in themselves.

“Creators, to make art today, you have to be the CEO of your own media company”, Conte told me. They must lead their own expansive social media empires, criss-crossing the landscape because there’s no lane to stay in anymore. The goal is ubiquity by every means necessary, to become a jack-of-all-trades AND the king of one. 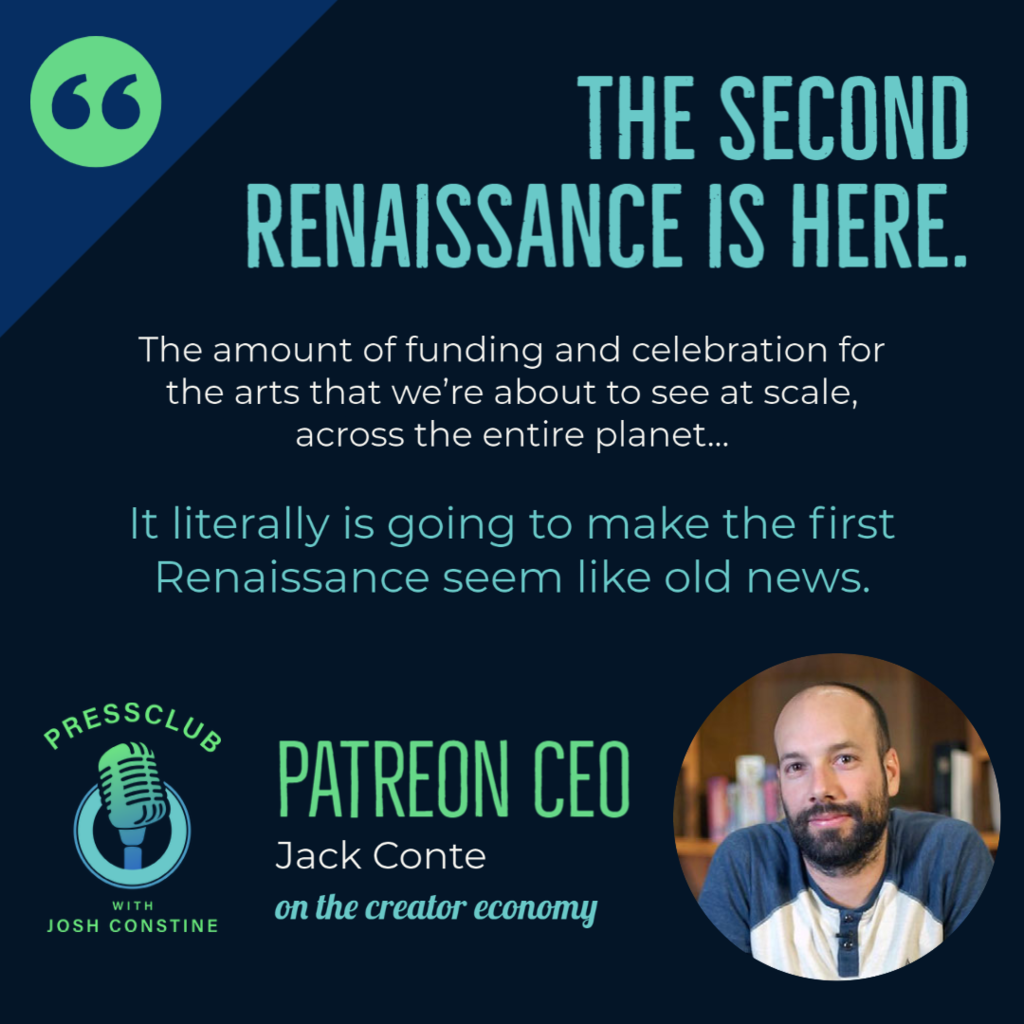 If creators follow this path, Conte sees two powerful results. “One, creators are going to make more and more money. Trend number two, they're going to spend more time on their art. And these companies are going to take work off of creators’ plates [like hiring, shipping, logistics, post-production, and finances]. I think what we're going to see is . . . more and more companies picking apart those problems one by one and giving creators a way to not have to do every single part of the whole operation from scratch, so that creators can focus on making their art.”

The failure of the creator renaissance would be that artists are so busy managing their newfound tools that it drowns out the moments of inspiration. That’s why usability, instinctive onboarding flows, deep documentation, and reliable customer service will be so critical for startups building these creator tools. Instead of clumsy and inscrutable enterprise software, they should feel like instruments that creators can intuitively play while remaining in artistic flow.

Success looks like a thriving middle-class of creators, not just the most popular 1%, plus the production and growth teams surrounding them building sustainable careers by delighting a niche audience.

Conte sums it up with an exclamation point. “This is a renaissance that we are going through. The amount of funding and celebration for the arts that we're about to see at scale across the entire planet — it literally is going to make the first Renaissance seem like old news. We're about to see tens of millions of creative people empowered and enabled, and part of a movement . . . We're going to recognize the value that artists bring to the world, the impact that artists have on society, and artists will be compensated for that work . . . like any other person who's contributing to society and culture is paid. It's literally the best time in human history to be making art!”

Big thoughts from Patreon’s Jack Conte on the PressClub Podcast

To check out my full chat with the pioneer of the creator economy, listen here on whichever podcast app you prefer. Check it out for more on Patreon’s origin story, opportunities for creator tool startups, the history of patronage, and what the company will spend its new $155 million fundraise on. Here are just a few of Conte’s top quotes. 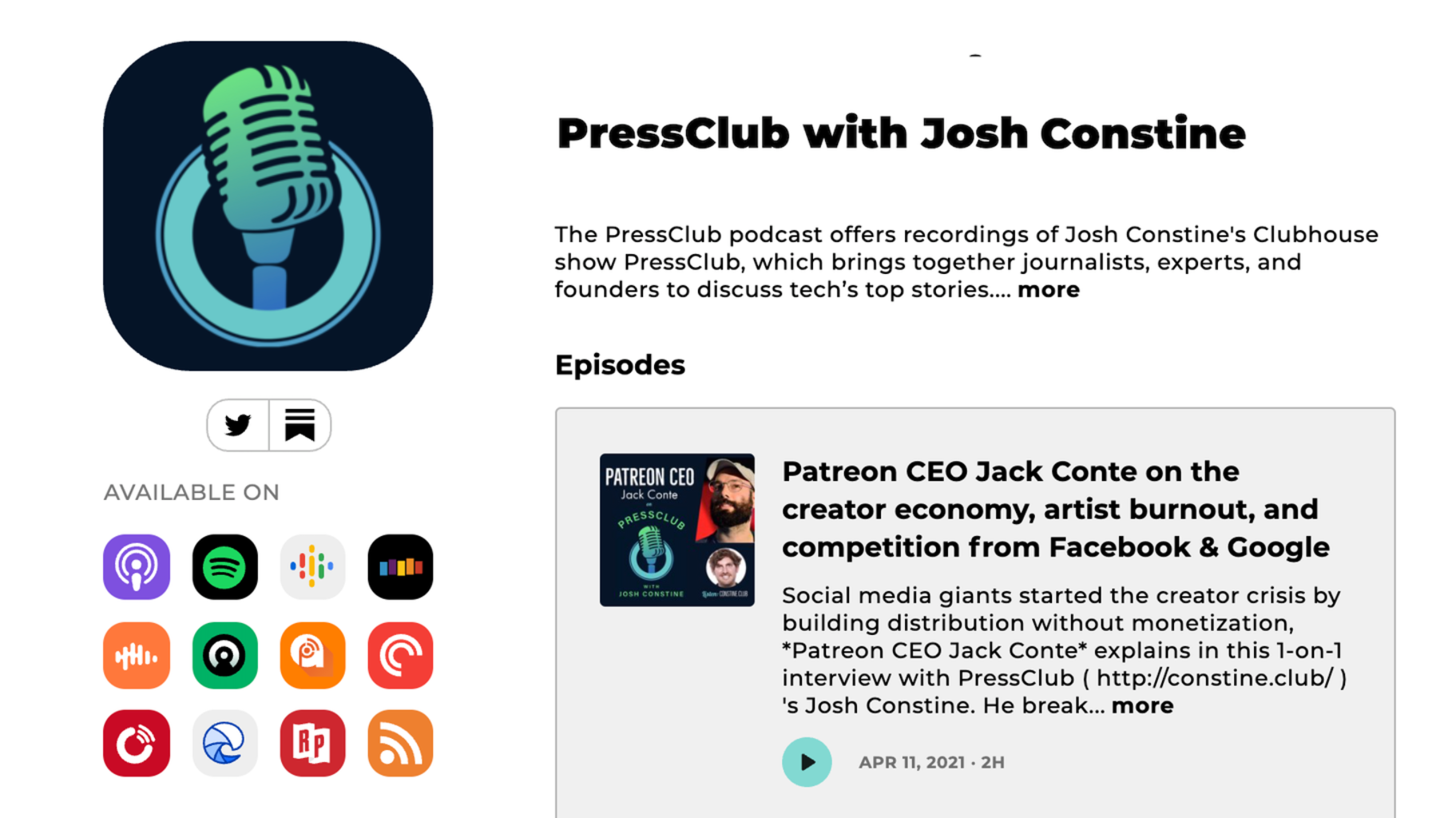 “At some point, we started calling art ‘content’ which I think is a travesty. ‘Content’ fills a hole. Content belongs in a feed. Art should be cherished, because it's beautiful and important. And it's not information, it's not ‘content’, it's art. When you think of it like content, the space that it occupies in your brain is that, ‘this is a commodity’. It commoditizes the output of creators, it makes it all one thing.

It's the same reason I don't like the word ‘influencer’. ‘Influencer’ extracts the one thing from creators that advertisers care about — influence — and then it commoditizes that capability. So if I'm a creator, I don't want to be called an influencer, that's not what I do, I don't wake up in the morning to influence — it’s ridiculous. I wake up in the morning to make art. But what am I to an advertiser? I am a person who can influence others. I think that's BS.”

Creator burnout? Ask for a vacation

“Creators must find the balance that works for them.” Conte’s own band Pomplamoose that he leads with his wife Nataly Dawn scrapped a year’s worth of plans when she felt burned out. “We said, ‘The only goal this year is making this sustainable for Nataly.’ And we worked on it together, and we did a ton of work to make that happen.  We hired a team. 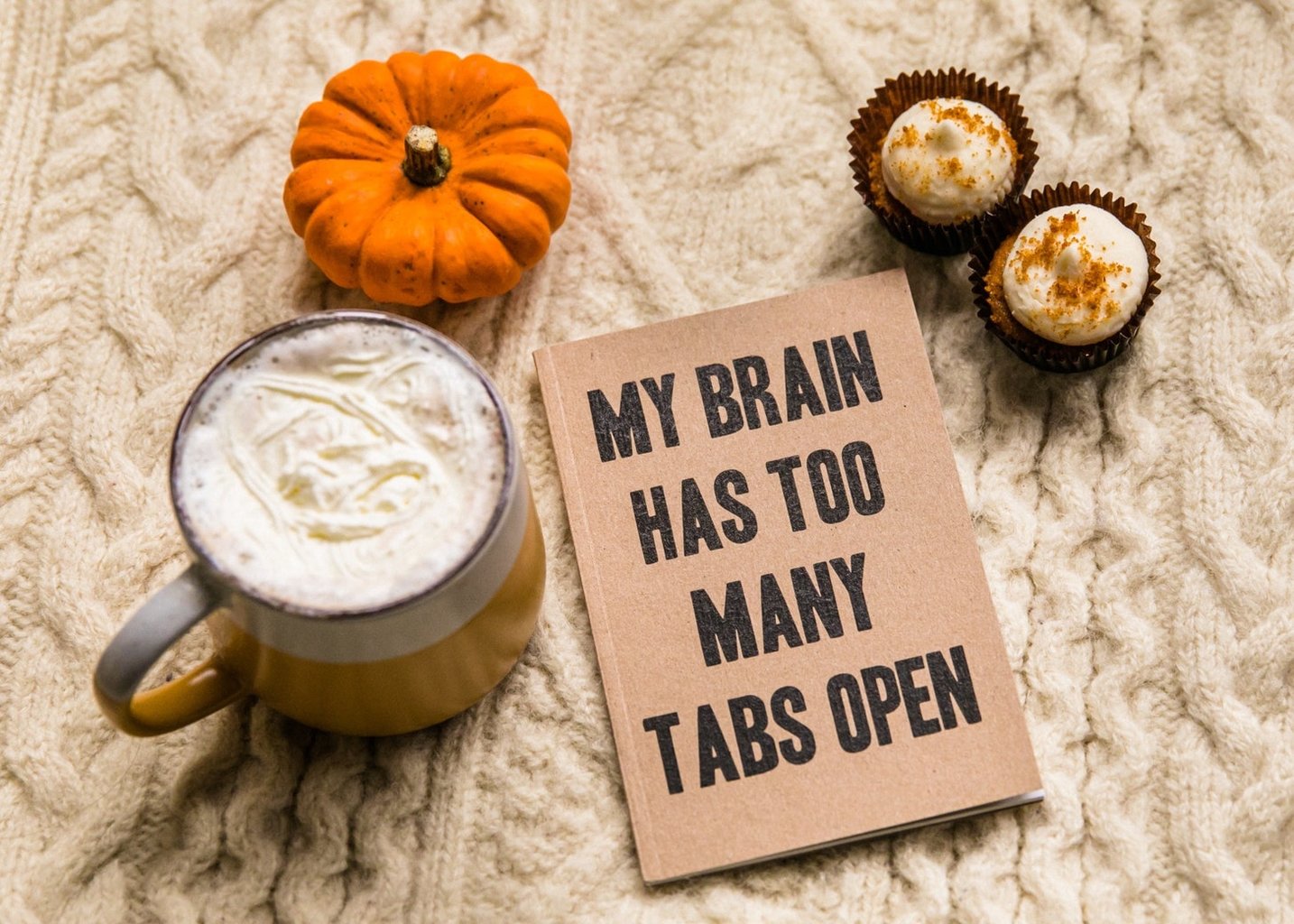 The best examples I've seen of this are when a creator goes to their audience and is like, “Folks, I'm exhausted, I'm wiped, I need a month off, I'm gonna be gone for a month,” and then they come back. I've always seen fans be super supportive of that, always. Because guess what? Your fans take vacations too . . . What doesn't work is to just be on the treadmill and to just resign yourself to feeding the beast and to slowly hate your career and hate life.” He supports Hunter Walk’s idea for algorithmic platforms to provide ‘PTO’ where creators get a few weeks off, still get paid, and don’t lose their reach for going silent. “It would be awesome if the distribution platforms basically gave you a way to not get dinged and to take a break.”

Facebook & Google will succeed with creators for the wrong reasons

“Surprisingly, Conte thinks Facebook and the other platforms’ sudden interest in the creator economy will pay off…because their multi-hundred-billion-dollar businesses depend on it. “I'm an optimist, which I know is my Achilles’ heel, but I think they are going to be successful. If Facebook doesn't figure out monetization, they're not going to win over creators. And they freaking know that! So they better get good at monetization.

Thanks for reading! Got feedback? Building an amazing creator economy startup our fund SignalFire should know about? Reply or DM me!

Join me live on Clubhouse as I interview Substack’s founders and surprise guest writers about the rise of the solopreneur and why personalities are replacing publications. RSVP here 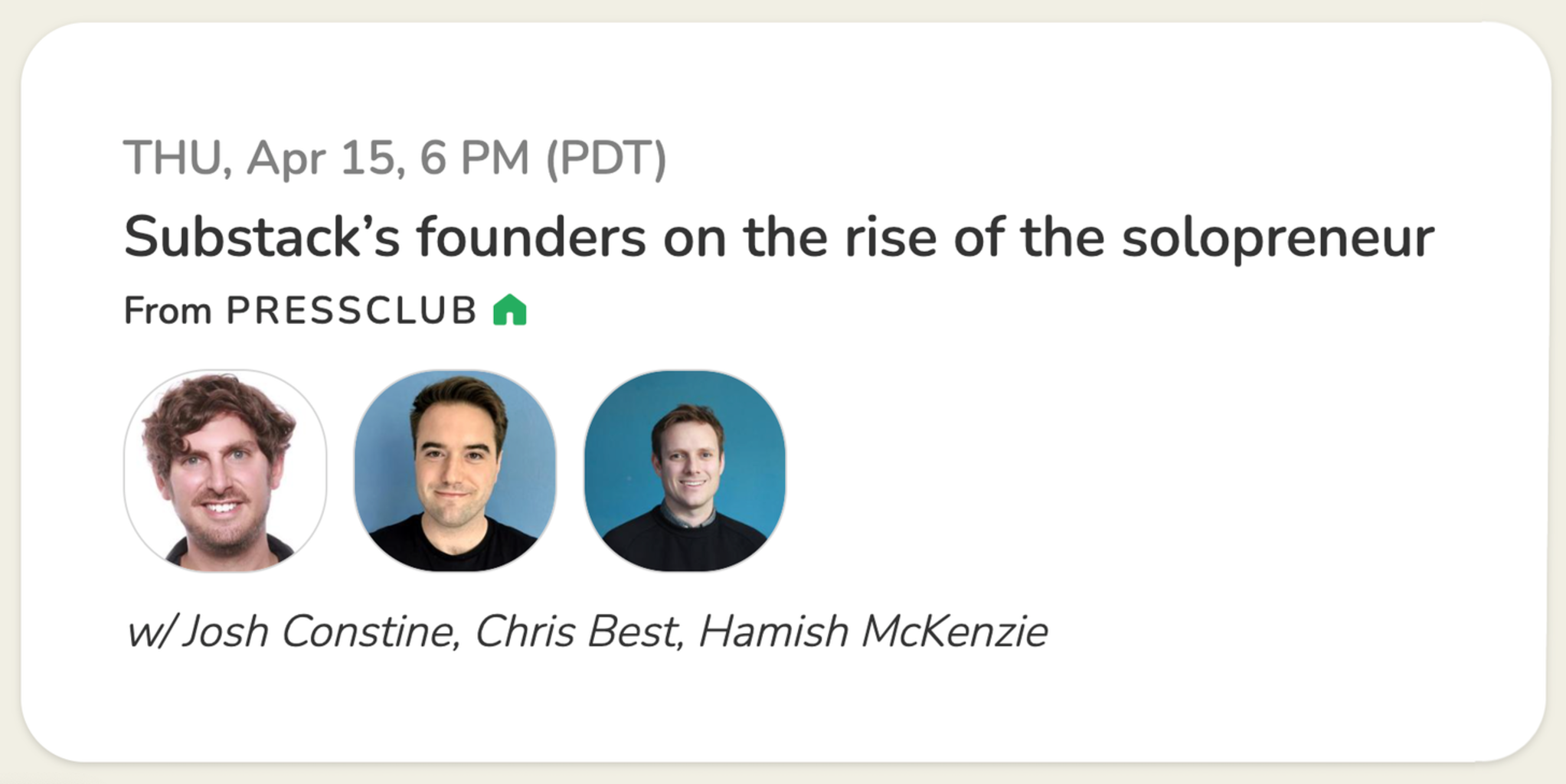 And in case you missed our recent newsletters & PressClub recordings:

If you’ve made it this far, I owe you one. Thank you for letting me do what I love for a living.